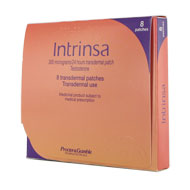 Millions of women in the US suffer from female sexual dysfunction (FSD), particularly after having a hysterectomey.  Proctor and Gamble developed the Intrinsa Patch, a transdermal delivery system that releases testosterone into the body.  Testosterone is a hormone that is naturally found in both males and females.  When the ovaries quit producing or are removed, testosterone levels crash and libido can also plummet.  If you have FSD, could the Intrinsa Patch be the answer for you?

Intrinsa Patch – Its Ingredients and How it Works

Female sexual dysfunction includes at least four conditions: a lack of desire, inability to feel arousal, painful intercourse, and failure to achieve orgasm.  These problems are often most significant in women who have had their ovaries surgically removed and post menopausal women.  Testosterone plays a significant role in sexual arousal.  This hormone is normally produced by the ovaries and the adrenal gland.  Once a woman has reached menopause or has a hysterectomy, testosterone is no longer produced in a meaningful quantity.

The Intrinsa Patch is designed to deliver a low dose of testosterone transdermally into the blood stream.  Testosterone therapy is a systemic treatment so it needs to be continued for a few weeks or months to have a notable effect.

P&G studies show that 73% of women using the Intrinsa Patch over a six-month time frame reported favorable results.  The women said that their satisfying sexual experiences per month increased fourfold over the course of the experiment.

Who Would Benefit from Using the Intrinsa Patch?

Where Can I Buy the Intrinsa Patch?

Unfortunately, if you live in the United States, you are not  able to buy the Intrinsa Patch.  The FDA has withheld approval of the hormone patch, citing concerns about safety.  Since the discovery that estrogen therapy increased women’s chances of having a stroke, the FDA wants to make sure testosterone supplements would not be a problem, too.  Because many women would be taking the testosterone in conjunction with estrogen, the need for caution is understandable.

At this time, you cannot even order the Intrinsa Patch from pharmacies in the UK where it is approved.  Unfortunately, the many women who may benefit from the use of this new patch will have to wait awhile longer to see if this is the FSD solution they have been seeking.

Have You Heard News About The Intrinsa Patch?  If So, Let us Know!

Rexaline Review - Does it Work?

Celebrity Hairstyles With Bangs and Layers

These blueberry lemon scones are to die for! I’v