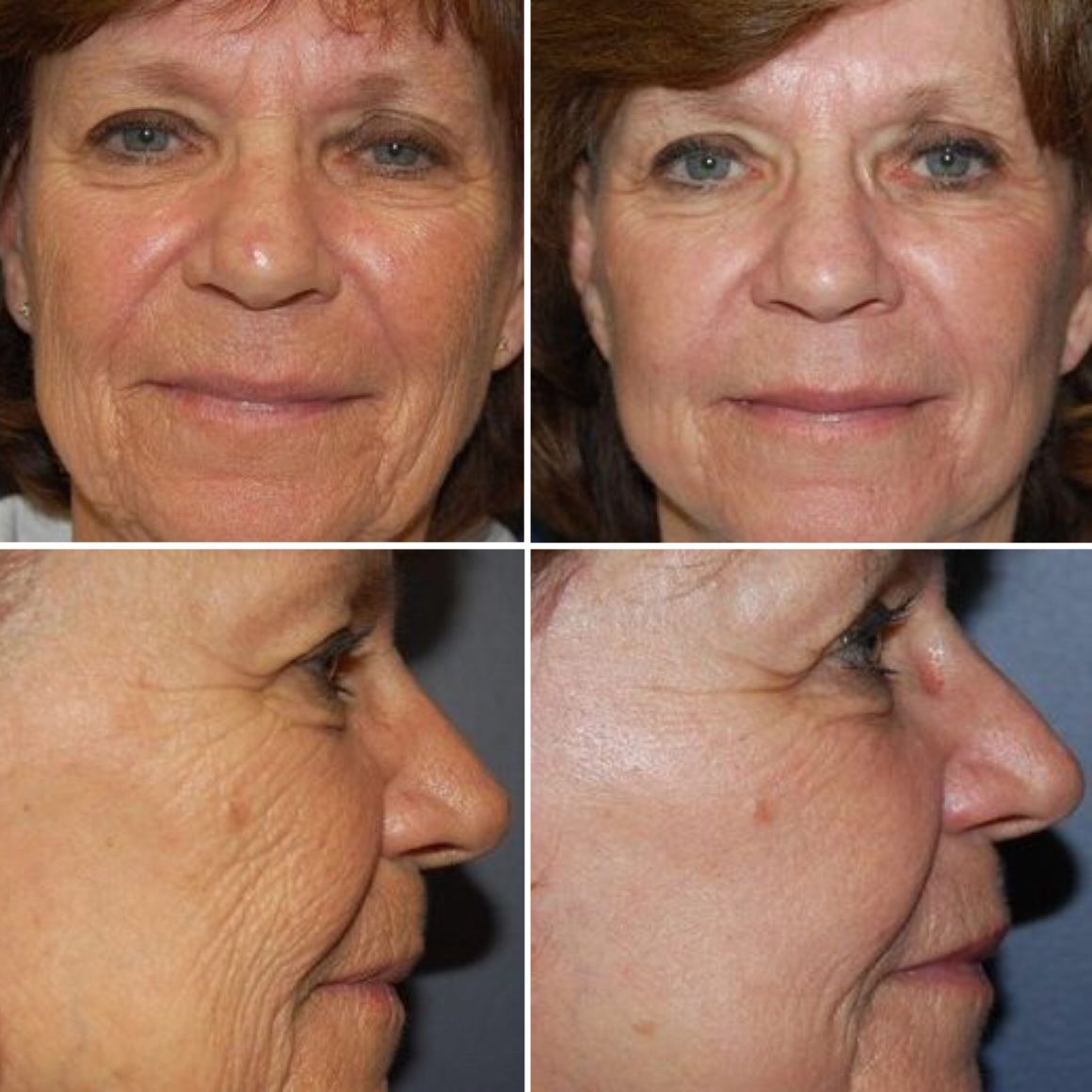 The collagen formation that occurs as a consequence of the procedure results in an improvement of wrinkles, making skin appear smoother and tighter.

What is laser skin resurfacing?

Our skin defines us. It is the largest and the most visible part of our body and functions as an armor, absorbing the brunt of both external and internal factors that compromises our skin’s appearance.

Laser resurfacing can help your skin appear younger and healthier when the effects of aging and environmental factors have compromised its vitality.

The results are natural, quick to see, and less risky than surgical options like facelifts. And because there are more laser skin treatments available than ever before, such procedures are an increasingly popular choice among people seeking to reduce signs of aging.

There are two main types of lasers: ablative and non-ablative.

Where ablative technologies heat and clear away the top skin tissue, non-ablative (or non-wounding) lasers are focused on areas beneath the surface skin and provoke collagen growth that tightens the underlying skin.

Ablative carbon dioxide lasers have been in used since the 1960s to treat both cancerous and non-cancerous skin conditions including acne scars, skin tags, moles and sagging skin.

“The CO2 laser is probably the gold standard when it comes to skin resurfacing, as it provides the deepest penetration of all lasers at this point in time. However, while effectively removing the most wrinkles, the recovery time from CO2 laser treatment is also the longest.”

CO2 lasers are successfully used to treat wrinkles, photodamage, scars, benign skin growths such as warts, birthmarks, enlarged oil glands on the nose, and a variety of other skin conditions

Post-treatment recovery takes about two weeks. During healing, it is crucial to protect your rejuvenated skin for the first few months by limiting your time in the sun and employing a 30 SPF sunscreen whenever you venture outside.

The laser is absorbed readily by water which means the heat effects are dispersed. These properties enable surgeons to remove thin layers of aged and sun-damaged skin tissue with precision without harming surrounding tissue.

“Erbium laser, unlike CO2 lasers, are gentle and provide medium depth resurfacing of the skin that is normally epithelialized within 5 to 10 days,” notes Dr. Grossman.

The resurfacing treatment generates OH radicals (hydroxyl radicals) that are anti-inflammatory and work as a kind of detergent that decomposes skin pollutants while stimulating wound healing and collagen production.

The Er: YAG laser is excellent at removing surface-level and moderately deep wrinkles and lines that appear on the face, hands, chest, and neck. It is also used to correct problems with pigmentation, acne scars, sun damage, and moles.

“The redness is much shorter lived and dissipates, in the majority of patients, in approximately six to 12 weeks.”

Patients are advised not to expose recently resurfaced skin to direct sunlight for the first few weeks following the procedure. Ergo, hats and sunscreens are a must even if your skin is exposed to the sun for just a few minutes.

Potential side effects include redness, swelling, and bruising, which may last for a few weeks.

Pulsed dye non-ablative lasers are lasers that use an organic dye as the lasing medium.

A pulsed dye laser delivers pulsed laser energy that passes through the epidermis and is absorbed by the oxyhemoglobin in the blood vessels instead of the encompassing tissue.

Results are permanent and the healing time is rapid, requiring no more than a couple of hours for the pinkness and the redness to subside. However, care should be taken in the first few days following treatment to avoid scrubbing the treated skin with abrasive cleansers.

Side effects include pain during the treatment that can be reduced via anesthesia. Temporary pigmentation and some bruising are also reported.

Neodymium-doped Yttrium Aluminum Garnet is a crystal used as a lasing medium for solid-state lasers and is renowned for its multiple application and treatment functions.

During the procedure the epidermis is cooled while the laser penetrates through the skin, injuring the thick layer of living tissue below the dermis. As a consequence, collagen production is stimulated and skin quality is improved.

Dr. Steiger notes that ND-YAG laser treatments are employed to diminish age spots, and spider veins, and erasing tattoos and birthmarks. “They are also excellent for gentle hair removal.”

There can be pain during the treatment. Redness, swelling, and itching may continue several days after the procedure.

This laser emits a wavelength of high energy light that is converted into heat energy.

It is used to treat brown spots due to sun damage, birthmarks, pigmentation problems, and pigmented lesions. It is also useful for hair, tattoo and leg vein removal.

Pain during treatment is common. Redness, swelling, and itching may continue for a few days. It may also cause changes in pigmentation.

Consumers often confuse IPL (Intense Pulse Light) and laser skin resurfacing. While both modalities use light to address common skin concerns, there are significant differences between these two approaches.

Lasers deliver a single wavelength of light, whereas IPL uses a broad spectrum that is filtered depending on the targeted skin condition.

Unlike laser-based treatments, the wavelengths produced using IPL penetrate just below the skin. As such, IPL is generally not recommended as an effective treatment for deeper wrinkles or skin laxity, and is more often used to focus on age spots and visible blood vessels.

IPL treatments may cause some minor skin flaking and redness, but no downtime is required.

“Treatments can be done during a lunch hour,” says Dr. Breslow. It’s a very well-tolerated procedure.”

If you are considering laser treatments to improve your skin, you are encouraged to contact a board-certified cosmetic surgeon to learn what procedure is right for you.

Leanbean Review - My Results with the Female Fat Burner