Nivea My Silhouette is a product that needs no real review at all. In a recent agreement with the Federal Trade Commission, Beiersdorf, the parent company of Nivea was fined $900,000 because their product, Nivea My Silhouette, did not live up to the claims of fat reduction made in a TV advertising campaign. In a market already full of skeptical customers, this does not raise many hopes for the millions suffering with cellulite build up. 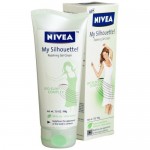 Nivea My Silhouette offered to reduce and eliminate fat cells for the millions of women around the world desiring to rid themselves of those annoying cellulite plagued areas. Containing anise and white tea extracts, it was supposed to firm and tone skin with visible results after only four weeks. It’s fat busting properties were never proved and customer reviews showed no noticeable reductions.

Nivea My Silhouette is a Good Moisturizer

Nivea My Silhouette is Not a Cellulite Fighter

Nivea My Silhouette is Unavailable

Nivea My Silhouette is no longer available from the manufacturer. It is not even listed as one of their products on line at niveausa.com. Some retail stores may still have inventory but who would be using it?

Nivea My Silhouette is a Bust.

Have you tried Nivea My Silhouette? Leave your review below.

Bliss Fat Girl Slim Review – Is Anyone Getting Results?